As I mentioned in my previous post, I am starting a series of detailed blog entries that focus on each topic from a recent CodeStock presentation I gave entitled, “Useful jQuery tips, tricks, and plugins with ASP.NET MVC”

I’ve done several talks about jQuery over the last several months and a common question I get is how to get jQuery Intellisense into Visual Studio.

The steps to include Intellisense are actually quite straight forward and are actually easier than they were several months ago.

If all goes well, then you should be able to see jQuery Intellisense like this… 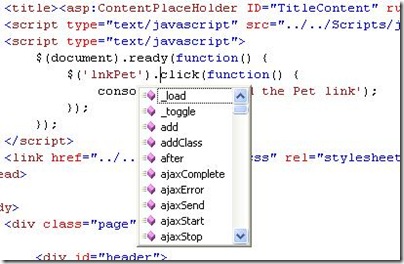 If the steps don’t give you the above results, then you might try checking out some frequently asked questions hosted on Jeff King’s (a program manager at Microsoft) website. He has a great list of gotchas that might help you getting past your particular situation.

Also, you can check out Scott Gu’s or Rick Strahl’s posts for further details of the above instructions.