Don't Initialize All the Things in jQuery.ready() 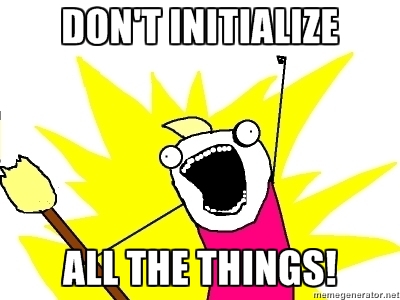 One of the first impressions a user gets is loading your web application for the first time. Users don’t have a high tolerance when it comes to page speed. They want to see something almost immediately and then be able to start interacting with your web site shortly after.

If your website utilizes JavaScript and jQuery, which many web sites do, it is very tempting to pre-initialize all of your logic (plugins, widgets, modules, event handlers, etc) in order for them to respond as fast as possible. Unfortunately, initializing ALL THE THINGS during page load works against the user’s goal of loading quickly. Instead of initializing everything when the page is ready you can instead wait to initialize portions of your application until they are needed.

The following examples will show two ways of initializing a date picker. The first way will “Initialize All the Things” and the other example will use the “Just-In-Time Initialize” principle.

In order to convey the idea I’m trying to explain it is probably easiest to show a code sample and then talk about what is happening. We will be using the following HTML for the markup that our code examples will be using.

I am using Twitter Bootstrap to made the UI look more presentable and that is why you are seeing some extra classes attached to the above markup.

The markup shows a simple form with various input elements. In the form we will have multiple date fields that we will want to initialize using the jQuery UI datepicker widget.

Initialize All the Things

The following jQuery code looks familiar to many snippets that you’ll might find across the internet, in tutorials, and possibly in your web applications.

I am using the small moment.js library to help with data manipulation. It is a handy date library that I think you'll find very compelling and rich with features.

Let’s unravel what the code is doing…

Pros of this Technique

Cons of this Technique

The following code snippet looks considerably different from the previous example, but the end result is the same and the Pros and Cons are quite different. See if you can spot out the differences.

You can view, run, and edit the above code sample from JsFiddle or you can interact with the embedded version below.

I am using the toastr library to show messages indicating when the elements were initialized. This library was created by Hans Fjällemark and John Papa.

As we did in the previous example let’s outline what is happening in the code and then we will examine the Pros and Cons of this technique.

Pros of this Technique

Cons of this Technique

You want to limit initializing all the things all the time. It can be helpful if you start to think about delaying initialization until the point when you need it or possibly right before. By doing so you can utilize the time right after jQuery is executed and not wait for DOM ready then you are able to use that precious time during page load. In addition you can have a crazy weird jQuery selector that still is fast. In our last code example above had a complicated selector, but it was very fast because it is only being tested against the one element that was focused on and not the whole DOM tree.

Much of this material was gleaned from an awesome series Doug Neiner has given at the past several jQuery Conferences entitled "Contextual jQuery" (video & slides). If you haven't already seen his talks or slides I highly encourage you to go through them.