Use the `prefers-reduced-motion` media query to toggle CSS and JavaScript animations
The above video is hosted on egghead.io.

In this post we focus on toggling animations on and off using the prefers-reduced-motion media query. We will take a look at addressing 3 types of animations (CSS, SVG SMIL, and JavaScript) and we will toggle these animations using different techniques such as @media, matchMedia, and a custom React hook.

NOTE: You can find the code for this project in GitHub and you can see a GIF of the final experience at the end of this post. 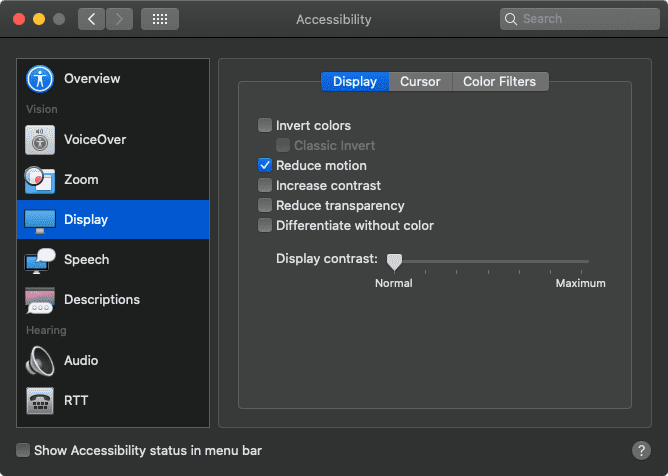 Many operating systems have a Reduce Motion feature in their Accessibility settings. As of now, our web app does not respect this setting, but we will update our app to do so.

The following CSS detects for a reduced motion experience and adjusts the .App-logo and .Logo-orbit selectors to turn off their CSS animations. With this small bit of code, your app can dynamically toggle animations as the user adjusts their Operating System Reduce Motion setting.

NOTE: For a bigger picture of the codebase reference the video above or check out the GitHub link above.

We could follow suite and use CSS to adjust a SVG SMIL animation, but we can't exactly pause the animation. The best we could do is hide the animation by making the elements display: none, however that does not seem like the best solution.

So, let's use another technique. We will shift to using JavaScript instead. We can use the matchMedia API via JavaScript to match the same media query from our CSS. The following uses React Hooks to setup matchMedia and wires up an event handler to adjust to any changes that may occur.

Lastly, we'll focus on removing the animation from the bar charts, which are animated via JavaScript. The code uses framer-motion for the animation and each element has a animate prop that we can dynamically set.

Since we already have defined shouldReduceMotion, we can leverage that state and update the animate prop to either be undefined or true based on it's value.

Before we finish, let's utilize a custom hook that framer-motion provides called usedReducedMotion. This essentially does all the stuff that we manually wrote earlier... so we can delete much of our code... and replace it with shouldReduceMotion equals useReducedMotion.

I hope that this helped show different ways that you can manage turning on and off animations depending on the Operating System's Reduce Motion setting. Please be kind to your users. Some may not like animations and others may have medical issues concerning animations.