Add ESLint Rules to a `react-blessed` Application
The above video is hosted on egghead.io.

This is the 2nd post in a series where we will be creating a developer dashboard in the terminal using react-blessed andreact-blessed-contrib. For more information about the series and to take a sneak peak at what we're building, go to the 1st post in the series for more context.

NOTE: You can find the code for this projectin GitHub and you watch the whole Build a Terminal Dashboard with Reactvideo series onegghead.io.

If we come to the terminal and run npm start, you'll see the app kick-up and display the current date, time, and a counter.

This code at this point in the React Terminal Dashboard series is minimal, but as code starts to accumulate it'll be helpful to statically analyze the validity of our code going forward with ESLint.

Once installed, we'll use npx to execute the locally installed version of eslint and pass the --init flag to start a series of prompts to help initialize our ESLint configuration.

You'll be asked a whole list of questions, but once the prompts are completed, you'll have a new .eslintrc.js file in the root of your app folder.

Since we want to add some specific rules for React Hooks (eslint-plugin-react-hooks), we'll manually tweak the .eslintrc.js file.

NOTE: Instead of extending the recommended rules for ESLint and eslint-plugin-react, you maybe want to tweak which rules you and your team prefer.

Now, let's switch to our package.json file, where we'll create a new npm script called lint that will kick up the locally installed eslint module and run the linter against the code in the current directory.

Once the npm script is defined you can execute the script by running npm run lint from the terminal.

Seeing linting output in the terminal is great, but it's also handy to be able to see warnings and errors directly in your IDE. Most popular code editors have an ESLint extension available to install that will detect an ESLint configuration file and visually indicate violations within the editor. I have the ESLint Extension installed in VS Code. 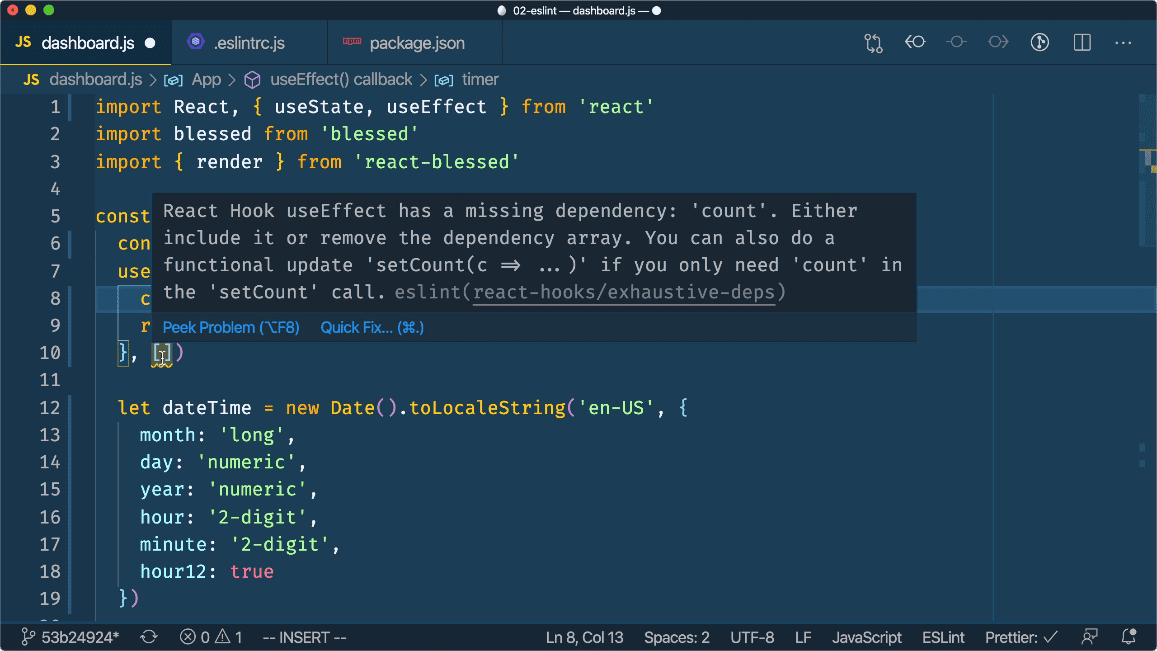 As your application grows it's can be helpful to add ESLint to statically analyize your codebase for common error and recommendations. Using the eslint init tool is a helpful way to get started.